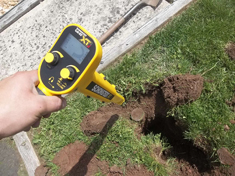 When you’re buying a New Jersey home, here’s something you might not expect: there could be an oil tank underground on your property! Buried oil tanks might have been placed there for whatever reason, long ago, and they could be leaking… So, it makes sense to have an oil tank scan (aka an oil tank sweep) professionally done in order to locate this hidden danger.

The Importance of Oil Tank Scans

Oil tank scans typically use ground penetrating radar and/or electronic imaging to find oil tanks buried underground. And in some cases, in order to approve your home loan, the bank or mortgage company (or real estate people) might require that you do an oil tank scan. Why is this important? Well it comes down to liability. A leaking oil tank is not a good thing, and you don’t want any harm to come to anyone who encounters such a thing. Meanwhile, soil has to be cleaned up if there is a major leaking problem. Environmental damage can easily be done by an old oil tank that’s leaking into the nearby soil and water supply. Vapors can be a fire hazard risk, and then, of course, there’s health concerns. Would you want to buy a house and breathe air that’s filled with carcinogens from a leaking oil tank nearby?

What are some signs you might have a leaking oil tank on a property? If there’s a lack of vegetation in a certain area, with no known cause, or you have drinking water problems (it smells or tastes funny), then you could have a problem. Also, if you smell a strong oil smell or notice an oily sheen in storms drains/ditches, there could be a leaking oil tank to blame.