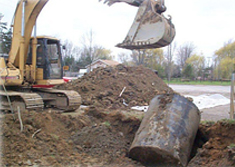 So you’re thinking of buying a home and you’re not sure you want to have an inspection done beforehand? Well, one of the reasons you should get one is to discover whether or not there’s an abandoned underground oil tank on the property in question. You don’t want to buy a property with one of those!

If there was or is an underground oil tank on a property, there’s a good chance leaks have occurred. These leaks could have allowed for a big loss of fuel over time and there could definitely be issues under a foundation thanks to such leaks. Meanwhile, the soil gets contaminated everywhere, including under decks and the foundation as well as in the yard.

A company like Cornerstone Home Inspections can conduct a modern test using electronic metal detection equipment to locate hidden oil tanks. This test can determine how deep the tank is in the ground as well as its size. If the house in question was built before 1960, there’s a greater likelihood that there could be underground oil tanks on that property. There are plenty of older homes in New Jersey, and some of them might very well have abandoned and/or leaky tanks.

Do you want children playing in yards where oil is present in the soil? No way! You know kids tend to put dirt in their mouths, so you don’t want them ingesting oily soil. Meanwhile, if you do buy a property with a leaky underground oil tank, you’re responsible for cleaning up the contamination on your property and that costs a lot of money in the long run. Yikes!

Cornerstone Home Inspections doesn’t do oil tank removal, but it can determine the presence of underground oil tanks in Bridgewater, New Jersey, and surrounding areas. Schedule an appointment to ultimately find out what’s underground by calling 1-800-648-6187 today.